So we had our first 200 point game and I just wanted to say that it was delightful. 200 points is so much more interesting than 100! That seems like it’d be obvious but I wanted to highlight it anyway.

The armies were roughly….

3×3 spearmen… he had shenanigans in there. One tray was a golem and there were two units upgrades.

Aaron picked an escort objective. He had a token on his Oathsworn Cavalry and needed to get it to another token on the other side of the map. You can see the other token in this picture, right in front of the reanimates on the far side of the table.

I chose to put the swamp in the middle. I figured it was big and would prevent him from just running at me. I wanted to force the battle to one side and to keep pressure off my squishy archers. I also wanted to leave the carrion lancers free to toss around blight tokens before the armies were engaged so Ardus would have access to mortal strikes through his surge ability.

Below is what it looked like after we were done deploying. 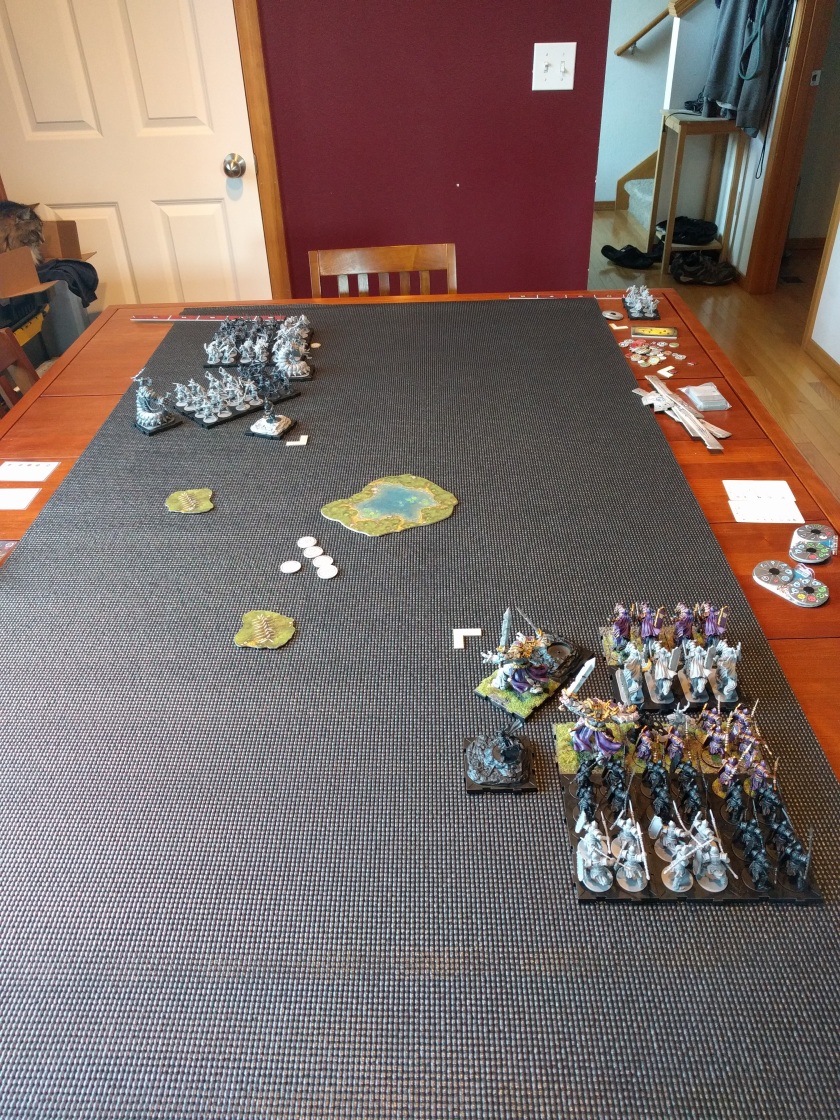 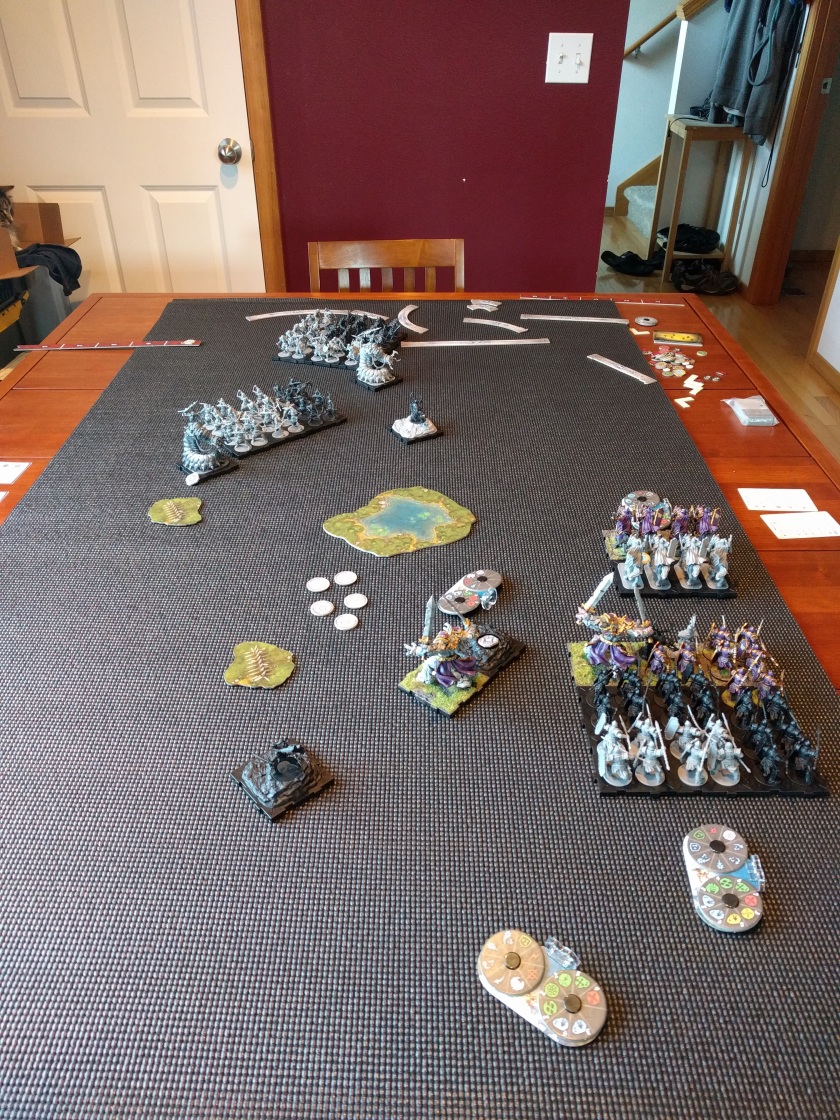 So I bumped my reanimates right into the back side of the far lancer. Felt l like a bit of a rookie mistake but this early it didn’t hurt. I was pleased that the calvary were charging out ahead. I had anticipated that they might try to squeeze by and hoped I would be in position next round to stop that. 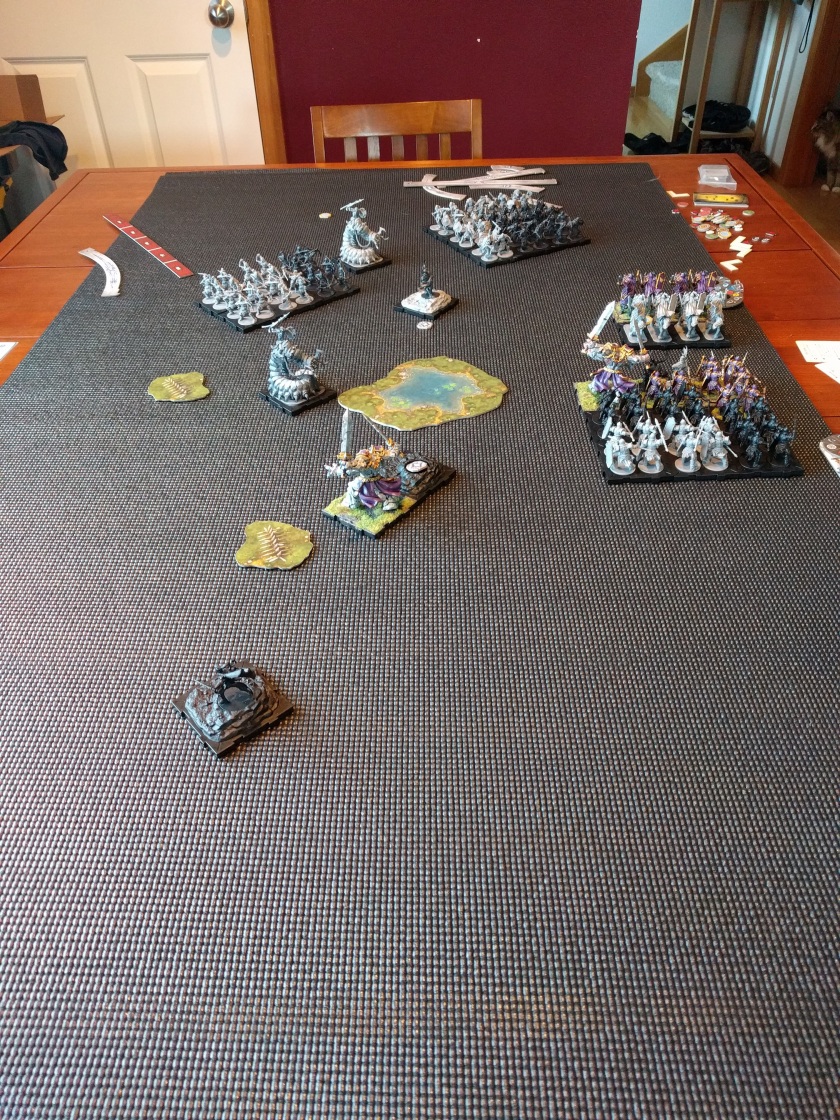 I had been worried that bumping the lancer with the reanimates was going to leave enough space for Aaron’s cavalry to run through. After this movement, I didn’t think it’d be possible for him to squeeze through. My archers had their choice of attacking golems or horses…

…and I chose horses. Took a few of them out and I was feeling pretty good about that. The carrion lancers also started to distribute blight tokens.

and I’m just not noticing how messy the area around the table is. D:

Same round from a different angle. 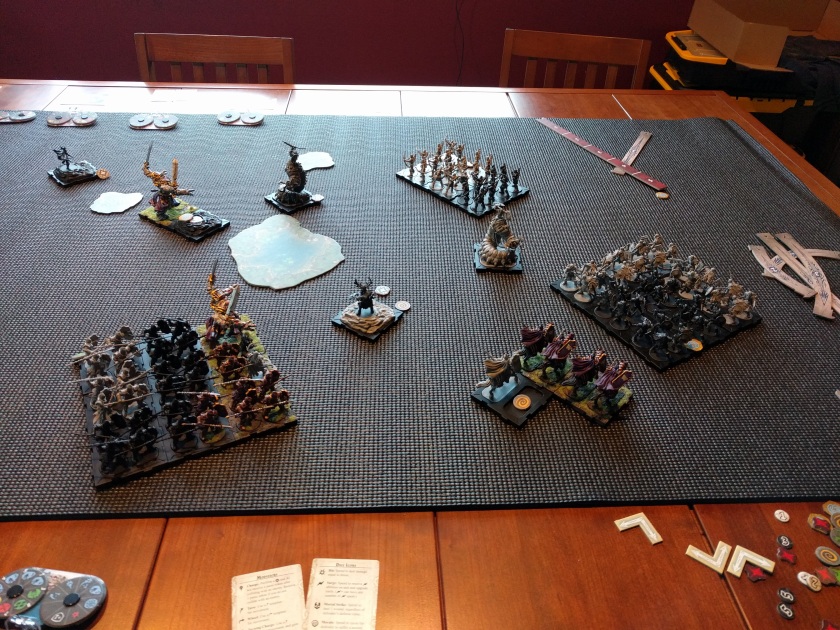 I figured, honestly, how much could a few dudes on horseback reall- OUCH. Took off the entire back row of the reanimates. Also, I’m not sure why I thought it would be a good idea for Ardus to Lerroy Jenkins his way into the spearmen… but I did that and this is the only time he’s ever died when I’ve played the undead. Obviously it was not my most superb idea.

He took off a single tray in the back though…

Can I kill a single guy on horseback?

Yes. This gives me the 50 points for completing the objective. Ardus killed some more spearmen and took a damage. I’m not going to lie, I think he’s actually a tank. A literal tank wearing a silly hat. Worth noting that at roughly this point in the game, I couldn’t roll dice for my archers to save their undead re-lives so the golems aren’t taking any damage from the spikes or the archers. It’s really just moral I’m hurting here. Do golems even have feelings? It’s also worth noting that since Ardus has run off on his own, he’s out of range to use the surge abilities of…. anyone. So there goes that plan.

The round goes off and Ardus is dead now. He missed a single spearman on that back tray so I haven’t stopped any re-rolls. The sole carrion lancer that’s left is channeling his inner Ardus and charging in like he’s ready die. (Spoilers: He will) At this point, the game is feeling a lot closer than I’d like, but I still have a nice 50 points left extra from murdering the horses. 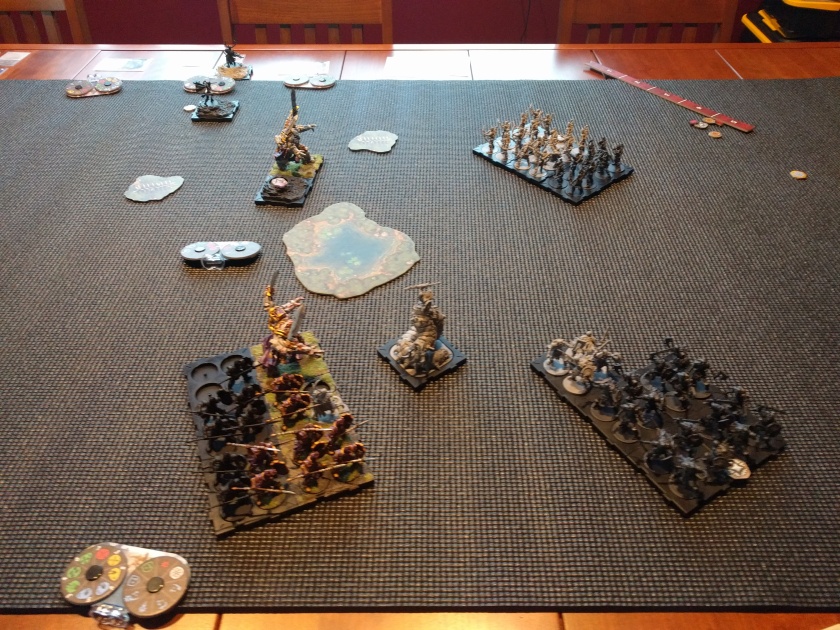 Ignore the lancer in the back on the table. He’s dead. My archers got a little toasted from Kari. The spearmen and reanimates slapped each other a lot. At this point, I’m hoping to not get obliterated by the end of the round.

Round 8 (Round not appearing in this picture)

The damage dealt in this round wasn’t enough to kill anyone enough to impact the point totals at the end. If you need a picture, imagine the golem off the swamp and archers ineffectually shooting at him. They’d have done respectable if they rolled something that wasn’t blank all the time.

I won narrowly due to the objective. 200 points felt like there was a lot more going on and units that I’d previously thought to be garbage in small numbers ended up being pretty darn good as a giant wall of death. I think Aaron’s 2×1 of Rune Golems was surprisingly survivable and I’ll have to look into that in the future. I think I’ll need to toss in some of the unit upgrades in my next list… maybe give the humans a try.

Above all else, don’t let Ardus pull a Lerroy Jenkins

We are now on Patreon! Click below to help support our podcast and get great patron rewards!
Become a Patron!

We do our best to bring you a fun listening experience, and for as little as $1(US) you can help us out. With your support we aim to take that experience even further! All donations go directly to improving the podcast so we can increase the quality and bring a better listening experience to you our loyal listeners and fierce Rune Warriors.