I thought I should show you what I’ve been up to since I blogged last.

Well Josh and I are going to talk about the first 200 point battle we had, which was tons of fun and made me want to play even more (should we find the time).

But last paint blog I showed off how I was going to do a massive batch of 8 and pre-painted them all purple to save time.  Well it didn’t exactly go as planned as you can propably tell from the time between posts.  Between adutling things I found the repetitive nature really demotivated me.  I will never try that many figures at one time.  I usually pace myself to get 4 spears done per week, but I thought I could push out 8 and it didn’t work.  Instead of getting 8 done in one week it took me 3 weeks to get 8 done.

So lets get into the process.  Since I sprayed purple (my most prominent color), I started with the colors used the least and worked to the most so that meant first was the metallic which is colored with Citadel’s leadbelcher.

Then I used Citadel’s Mournfang Brown for all the leather bits.

Then I used Retributor Armour from Citadel to base coat the gold.  This is what it looks like before shading. 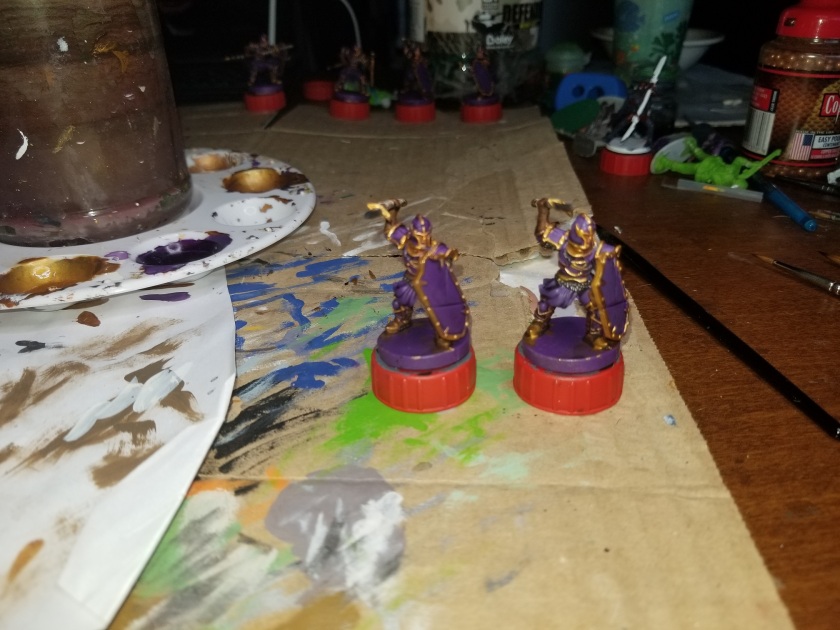 After a shade and some highlights here is what my army look like (sorry their in space):

Now that I bought the expansions for the infantry commanders and more cavalry I have a bit more on to do list.  Next time I plan on going through my decal process for those of you interested.

Remember to go to the facebook page and show us what you’re working on!

We are now on Patreon! Click below to help support our podcast and get great patron rewards!
Become a Patron!

We do our best to bring you a fun listening experience, and for as little as $1(US) you can help us out. With your support we aim to take that experience even further! All donations go directly to improving the podcast so we can increase the quality and bring a better listening experience to you our loyal listeners and fierce Rune Warriors.